Finding our stories within and without: Literature Hub @ Ulley Arts Festival 2019

Last weekend, I was asked to bring my books and my love of all things bookish to a new festival in Rotherham, South Yorkshire. I didn't have to be asked twice. The location of the first ever Ulley Arts Festival in itself was enough of a pull, with the sparkle of the lake, the walkways through ancient trees and hedgerows with wildlife visitors at every turn. Just perfect. 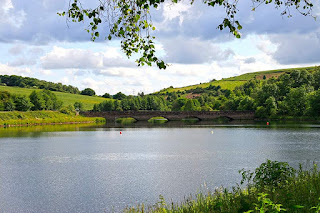 Attending and taking part in the first Ulley Arts Festival proved to be a real adventure for all involved. Friends of Ulley had worked tirelessly over the last twelve months to create an event for the community which included arts-based performances by schools, community organisations with arts and crafts opportunities for all ages.


'The idea of this event arose from the opening of the Spillway Performance Area in 2018. Our aim is to promote the use of the Spillway and encourage community awareness of all the park has to offer. Enthusiasm shown by many local schools and community groups led us to believe that an Arts Festival would prove to be successful.'

Volunteers coming together to provide such a magical weekend in this exquisite setting was something I had to be a part of and had felt so so lucky to be asked along.

Friday evening saw the festival launch, an evening with poet and comedian Ian McMillan and composer Luke Carver Goss, which proved to be a fun night of words, songs and story for the crowd in attendance. 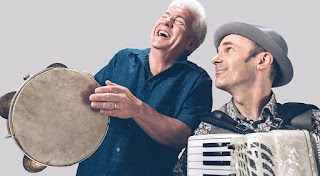 
Ulley Arts Festival opened to glorious sunshine on Saturday 29th June the festival buzz was a-buzzing. Entertainment from the likes of Aston All Saints Primary School Band, who performed a series of musical delights and City of Sheffield's Pipe Ban whose classical pieces struck a chord or two, floated over to the Literature Hub providing the perfect soundtrack to our day.Children flocked to write up words and phrases for our Wonderful Word Wall, create stories inspired by their surroundings and experiences of Ulley, and make their own books in our new favourite happy place. (Definitely mine. I wanted to move in!) 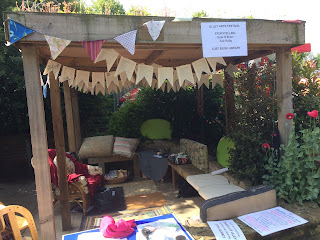 One young man said he didn't want to write but liked drawing so created a comic book which surprisingly found itself with captions and speech bubbles as the story progressed, proving that he couldn't help himself but write a little! We all have a story inside us and he found his own way to share it. 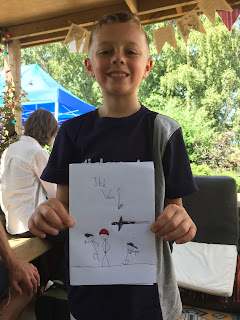 The Lost Book Library could also be found here, where children of all ages could come and choose a lost book to take home and call their own. Even one little boy who, when asked if he'd like to choose  book, told me he didn't like reading, was able to choose a fiction book about sharks as they were one of his absolute favourite things. He beamed when we found it and told us, 'I think I might like this one!' 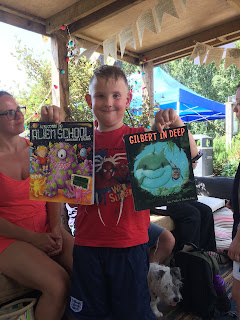 Rotherham African Drummers took their stage by storm and the families visiting me later were full of praise for the rhythms and enthusiasm of the percussionists. The group was of mixed ages and stages and they came together to create a powerful performance. 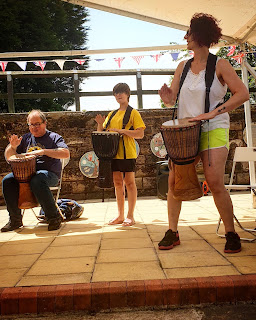 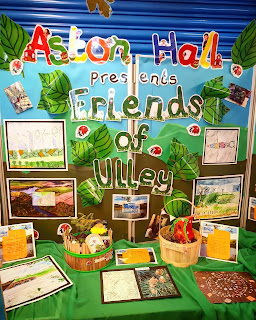 I shared the opening chapters of Driftwood and Amethyst and The Pixie Plot and also read picture books to children who wanted to sit and hear an old favourite. All children love to be read to and over the weekend, families sat reading books together. 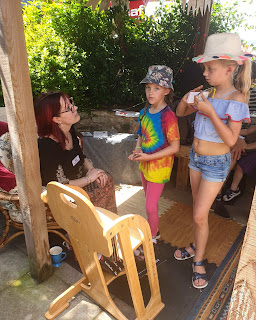 Sunday brought South Yorkshire Police Band performing both classical and modern pieces for all to enjoy. Folk singer, Ray Hearne, entertained the crowds later with political and social comment in song, some delights from his new album, Umpteen.

The fabulous TSA Vocals led a masterclass in singing the hits of Abba with a fun Mamma Mia workshop which was well attended and a real lesson in singing techniques and harmonies. James Brunt's Natural Art was breathtaking creating the extraordinary from the ordinary natural resources around us and inspired a  stories and comic books created with stone creatures and leaf insects back with me later on. 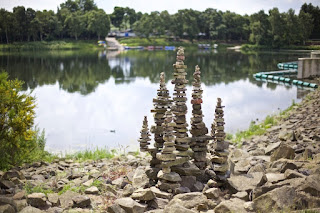 One young lady came in to the Literature Hub, took one look at the writing areas and sighed. 'I'm no good at Literacy', she confided. We talked about three things she's seen that had caught her interest that day and wrote them down on our Wonderful Word Wall, lay down on her tummy and started writing. No pressure, no drama, just her imagination and all of a sudden, a burning desire to write her story with the support of new friends. 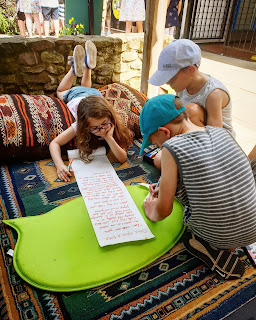 On Sunday, I was joined by Tair Rafiq, fellow author who came to share his debut novel 'Daisy and the Dwarf Dragon'. This had children laughing and gasping at the antics of a rather colourful character who popped up in the opening pages! All weekend, we were in our element reading, writing and sharing stories with families. The Literature Hub was a place children where children often returned, to choose new books and write their own stories while enjoying a little R&R. 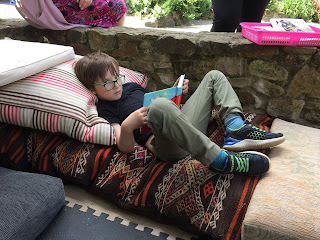 Such a wonderful weekend and the perfect way to unwind for children and adults alike. I just want to do it all again!
Ulley Arts Festival 2020 can't come soon enough.
at 7/08/2019

Kate'sWords: Corona-Virus Lockdown. My Six Step Survival Guide : We are in tricky times. Corona Virus has taken a grip in Italy, Spain a... 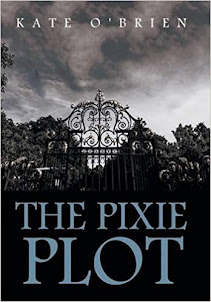 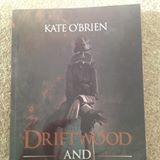